Kell Robdrup participated in a round-table discussion about Brexit in Esbjerg along with Morten Bødskov, Minister of Taxation (in the middle with Kell Robdrup behind). Further participants were Charlotte Møller and Maren Holm Johansen from the customs authorities, Dennis Jul Pedersen and Jesper Bank of Port of Esbjerg, Simon Galsgaard of DSV Road Denmark, Søren Thomsen of Blue Water Shipping, Michael Svane of Dansk Industri, Lars Albertsen of Danish Crown and staff from customs and from the Ministry of Taxation

On Monday 12 August, Morten Bødskov, the Danish Minister for Taxation, visited Port of Esbjerg. As you can imagine, Brexit was very much on the agenda. Therefore, the Confederation of Danish Industry (DI) took the initiative to arrange a round-table meeting, inviting major stakeholders such as DFDS, DSV, Blue Water Shipping and Danish Crown, the customs authorities and Port of Esbjerg to the talks about Brexit expectations and preparations. SVP Kell Robdrup represented DFDS as head of BU North Sea South and thus with responsibility for the Esbjerg – Immingham route which transports most of the trailers between Denmark and the UK.

“It was interesting that most operators were aligned with regard to expectations relating to post-Brexit traffic flows and the lack of preparation among smaller and medium-sized companies. I am also pleased that I was able to discuss directly with the authorities about their plans for a Border Inspection Point (BIP) in Esbjerg, and raise awareness about requirements for opening hours. It is, of course, vital that the check-point is open for business when our ferry arrives from the UK in the afternoon,” says Kell, who was pleased with the fruitful discussions and cooperative spirit of the meeting. 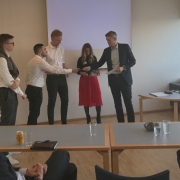 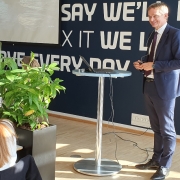 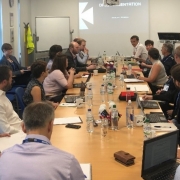 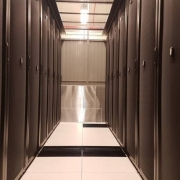 A new data centre becomes home for our non-cloud systems 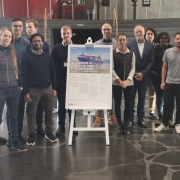 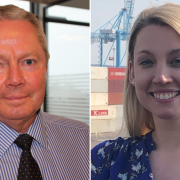 Peter Andersen to retire. Selina Lindquist to take over